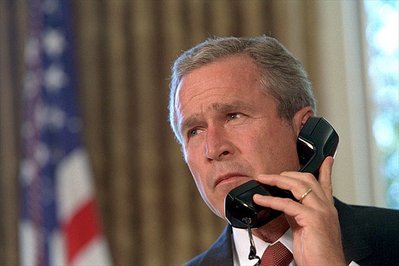 THE PRESIDENT:  Today, millions of Americans mourned and prayed, and tomorrow we go back to work.  Today, people from all walks of life gave thanks for the heroes; they mourn the dead; they ask for God's good graces on the families who mourn, and tomorrow the good people of America go back to their shops, their fields, American factories, and go back to work.

I also have faith in our military.  And we have got a job to do - just like the farmers and ranchers and business owners and factory workers have a job to do.  My administration has a job to do, and we're going to do it.  We will rid the world of the evil-doers.  We will call together freedom loving people to fight terrorism.

As I said yesterday, people have declared war on America, and they have made a terrible mistake, because this is a fabulous country.  Our economy will come back.  We'll still be the best farmers and ranchers in the world.  We're still the most innovative entrepreneurs in the world.  On this day of faith, I've never had more faith in America than I have right now.

THE PRESIDENT:  David, I understand that there are some businesses that hurt as a result of this crisis.  Obviously, New York City hurts.  Congress acted quickly.  We worked together, the White House and the Congress, to pass a significant supplemental.  A lot of that money was dedicated to New York, New Jersey and Connecticut, as it should be.  People will be amazed at how quickly we rebuild New York; how quickly people come together to really wipe away the rubble and show the world that we're still the strongest nation in the world.

But I have great faith in the resiliency of the economy.  And no question about it, this incident affected our economy, but the markets open tomorrow, people go back to work and we'll show the world.

Q            Mr. President, can you describe your conversation with the President of Pakistan and the specific comments he made to you? And, in addition to that, do you see other - you've asked Saudi Arabia to help out, other countries?

THE PRESIDENT:  John, I will - obviously, I made a call to the leader of Pakistan.  We had a very good, open conversation.  And there is no question that he wants to cooperate with the United States.  I'm not at liberty to detail specifically what we have asked him to do.  In the course of this conduct of this war against terrorism, I'll be asked a lot, and members of my administration will be asked a lot of questions about our strategies and tactics.  And in order to protect the lives of people that will be involved in different operations, I'm not at liberty to talk about it and I won't talk about it.

I made that very clear.  There is no doubt in anybody's mind with whom I've had a conversation about the intent of the United States.  I gave them ample opportunity to say they were uncomfortable with our goal. And the leaders you've asked about have said they were comfortable.  They said, we understand, Mr. President, and we're with you.

THE PRESIDENT:  Terry, I ask you to talk to the Attorney General about that subject.  He'll be prepared to talk about it publicly at some point in time.  But what he is doing is, he's reflecting what I said earlier in my statement, that we're facing a new kind of enemy, somebody so barbaric that they would fly airplanes into buildings full of innocent people. And, therefore, we have to be on alert in America.  We're a nation of law, a nation of civil rights.  We're also a nation under attack.  And the Attorney General will address that in a way that I think the American people will understand.

We need to go back to work tomorrow and we will.  But we need to be alert to the fact that these evil-doers still exist.  We haven't seen this kind of barbarism in a long period of time.  No one could have conceivably imagined suicide bombers burrowing into our society and then emerging all in the same day to fly their aircraft - fly U.S. aircraft into buildings full of innocent people - and show no remorse.  This is a new kind of  -- a new kind of evil.  And we understand.  And the American people are beginning to understand.  This crusade, this war on terrorism is going to take a while.  And the American people must be patient.  I'm going to be patient.

Q            Mr. President, you've declared we're at war and asked those who wear the uniform to get ready.  Should the American public also be ready for the possibility of casualties in this war?

THE PRESIDENT:  Patsy, the American people should know that my administration is determined to find, to get them running and to hunt them down, those who did this to America.  Now, I want to remind the American people that the prime suspect's organization is in a lot of countries - it's a widespread organization based upon one thing:  terrorizing.  They can't stand freedom; they hate what America stands for.  So this will be a long campaign, a determined campaign - a campaign that will use the resources of the United States to win.

They have roused a mighty giant.  And make no mistake about it:  we're determined.  Oh, there will be times when people don't have this incident on their minds, I understand that.  There will be times down the road where citizens will be concerned about other matters, and I completely understand that.  But this administration, along with those friends of ours who are willing to stand with us all the way through will do what it takes to rout terrorism out of the world.

Q            Mr. President, in your conversation with Pakistan's leader, was there any request or demand you made of him that he failed to satisfy?

THE PRESIDENT:  The leader of Pakistan has been very cooperative.  He has agreed with our requests to aid our nation to hunt down, to find, to smoke out of their holes the terrorist organization that is the prime suspect.  And I am pleased with his response.  We will continue to work with Pakistan and India.  We will work with Russia.  We will work with the nations that one would have thought a couple of years ago would have been impossible to work with - to bring people to justice. But more than that, to win the war against terrorist activity.

The American people are used to a conflict where there was a beachhead or a desert to cross or known military targets.  That may occur. But right now we're facing people who hit and run.  They hide in caves. We'll get them out.

The other day I said, not only will we find those who have affected America, or who might affect America in the future, we'll also deal with those who harbor them.

Q            Mr. President, would you confirm what the Vice President said this morning, that at one point during this crisis you gave an order to shoot down any civilian airliner that approached the Capitol? Was that a difficult decision to make?

THE PRESIDENT:  I gave our military the orders necessary to protect Americans, do whatever it would take to protect Americans.  And of course that's difficult.  Never did anybody's thought process about how to protect America did we ever think that the evil-doers would fly not one, but four commercial aircraft into precious U.S. targets - never.  And so, obviously, when I was told what was taking place, when I was informed that an unidentified aircraft was headed to the heart of the capital, I was concerned.  I wasn't concerned about my decision; I was more concerned about the lives of innocent Americans.  I had realized there on the ground in Florida we were under attack.  But never did I dream we would have been under attack this way.

Thank you all very much.