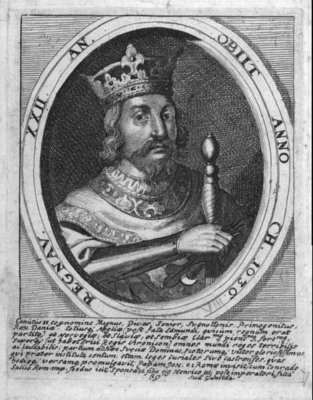 Cnut, king of all England, and of Denmark, and of the Norwegians, and of part of the Swedes, sends greeting to Æthelnoth the metropolitan, and to Ælfric, archbishop of York, and to all the bishops and leading men, and to the whole race of the English, whether nobles or ceorls.

1. I make known to you that I have recently been to Rome, to pray for the remission of my sins and for the safety of the kingdoms and of the peoples which are subjected to my rule.

2. I had long ago vowed this journey to God, but I was not able to perform it until now because of the affairs of the kingdom and other causes of hindrance.

3. But now I give most humble thanks to my Almighty God, who has granted me in my lifetime to visit his holy Apostles, Peter and Paul, and every sacred place which I could learn of within the city of Rome and outside it, and in person to worship and adore there according to my desire.

4. Especially have I accomplished this because I learned from wise men that the holy Apostle Peter had received from the Lord great power to bind and to loose, and was the keeper of the keys of the kingdom of heaven, and I considered it very profitable diligently to seek his special favour before God.

5. Be it known to you, that there was there a great assembly of nobles at the celebration of Easter, with the lord Pope John and the Emperor Conrad, namely all the princes of the nations from Mount Garganus to the sea nearest [to us]; and they all both received me with honour and honoured me with precious gifts; and especially was I honoured by the emperor with various gifts and costly presents, with vessels of gold and silver and silk robes and very costly garments.

6. I therefore spoke with the emperor and the lord pope and the princes who were present, concerning the needs of all the peoples of my whole kingdom, whether English or Danes, that they might be granted more equitable law and greater security on their way to Rome, and that they should not be hindered by so many barriers on the way and so oppressed by unjust tolls; and the emperor and King Rodulf, who chiefly had dominion over those barriers, consented to my demands ; and all the princes confirmed by edicts that my men, whether merchants or others travelling for the sake of prayer, should go to and return from Rome in safety with firm peace and just law, free from hindrances by barriers and tolls.

7. Again, I complained before the lord pope and said that it displeased me greatly that my archbishops were so much oppressed by the immensity of the sums of money which were exacted from them when according to custom they came to the apostolic see to receive the pallium. It was decided that this should not be done in future.

8. Indeed, all the things which I demanded for the benefit of my people from the lord pope and from the emperor and from King Rodulf and the other princes through whose lands our way to Rome lies, they most willingly granted, and also confirmed what they had conceded with an oath, with the witness of four archbishops and twenty bishops and an innumerable multitude of dukes and nobles who were present.

9. Therefore l give most hearty thanks to Almighty God, that I have successfully accomplished all that I had desired, just as I had designed, and have carried out my vows to my satisfaction.

10. Now, therefore, be it known to you all, that I have humbly vowed to Almighty God to amend my life from now on in all things, and to rule justly and faithfully the kingdoms and peoples subject to me and to maintain equal justice in all things; and If hitherto anything contrary to what is right has been done through the intemperance of my youth or through negligence, I intend to repair it all henceforth with the help of God.

11. For this reason I implore and command my councillors, to whom I have entrusted the councils of the kingdom, that from now on they shall not in any way, either for fear of me or for the favour of any powerful person, consent to any injustice, or suffer it to flourish in any part of my kingdom.

12. I command also all the sheriffs and reeves over my whole kingdom, as they wish to retain my friendship and their own safety, that they employ no unjust force against any man, neither rich nor poor, but that all men, of noble or humble birth, rich or poor, shall have the right to enjoy just law; from which there is to be no deviation in any way, neither on account of the royal favour nor out of respect for any powerful man, nor in order to amass money for me; for I have no need that money should be amassed for me by unjust exaction.

13. And therefore I wish to make known to you, that, returning by the same way that I went, I am going to Denmark, to conclude with the counsel of all the Danes peace and a firm treaty with those nations and peoples who wished, if it had been possible for them, to deprive us both of kingdom and of life, but could not, since God indeed destroyed their strength. May he in his loving-kindness preserve us in sovereignty and honour, and scatter and bring to nought the power and strength of all our enemies from henceforth.

14. Then, when peace has been concluded with the nations which are round about us, and all our kingdom here in the east has been set in order and pacified, so that we need fear no war or enmity from anyone from any quarter, I intend to come to England as early in the summer as I can get a fleet equipped.

I5. But I send ahead this letter, in order that all the people of my kingdom may be gladdened at my success, because, as you yourselves know, I have never spared – nor will I spare in the future – to devote myself and my toil for the need and benefit of all my people.

16. Now, therefore, I command and implore all my bishops and reeves of the kingdom, by the faith which you owe to God and to me, that you bring it about before I come to England that all the dues, which according to ancient law we owe to God, shall be paid in full, namely plough-alms and tithe of livestock born that same year, and the pence which we owe to St. Peter at Rome, whether from the towns or the villages, and in the middle of August tithe of the fruits of the earth, and at the feast of St. Martin the first-fruits of the grain (which are called ‘church-scot’ in English) to the church of the parish where each man resides.

17. If these dues, and others like them, are not paid in full when I come, the royal collectors are to obtain them according to the laws, sternly and without re mission, from him who is in fault.